the first time i went to roosevelt island, i went with my sweetie. we took the train (the f is the only one that stops there) and walked north. i’d read a little and found that there was a little old lighthouse at the north end. so we walked there. it was maybe 6 or 6:30 pm. the island is quiet compared to manhattan, and we walked on the queens side. very residential tall buildings and parking lots, and there were cats! just laying around. so close to the busy city, but by the way the cats were just hanging out i could tell it was so much calmer. it was a lovely evening.

the lighthouse was pretty and old.

there was a full low moon, and it was still light out, a man on a bike told me to take a picture of it. i didn’t though. i was staring up at the lighthouse at this point.

we walked back along the manhattan side and were awed by the view of the tall buildings from the middle of the east river. we took the tram back over, which was wonderful! such a view, and it was sunset. just gorgeous. and the tram is cheap (compared to other trams we’ve ridden… you just use your metrocard!), and fast and solid.

the next time i went with my friend robin. i met here there, on the island. since the last visit i’d done more research and realized i’d missed the part i’d be most interested in. a ruined building! ahhh! so i made a plan to go with robin the day before we had to fly back to oregon.

the ruin is beautiful. old and very ruined, fenced off and growing ivy and weeds. no roof, just the sky visible through broken bits. at some point (i think in the 80’s) supports were added after one of the walls fell down.

the hospital has been unlived in since the 1950’s or so. and before that it was not terribly inhabited. way back it was more used, but has just fallen apart in the past 50 years. and now it’s all exposed and broken up. it is very beautiful. it opened in 1856.

so many people must have died here, the only hospital in new york to deal in small pox. didn’t really want to bug the dead people. in retrospect, and with respect, i should have stayed longer. maybe they were bored. all stuck in that fenced ruin on the quiet part of the little island.

if you like old buildings that are being taken back over by nature, very near very large cities, you’ll love this place.

some history of the island: click here and here. 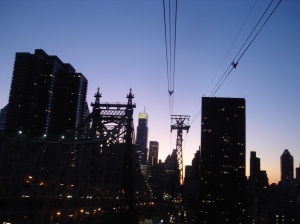 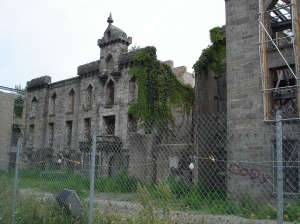 a quick drawing i did on roosevelt island